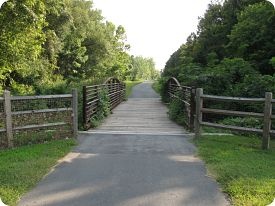 The Irwin Creek Greenway runs 1 and 2/3rds miles through and around part of uptown Charlotte. Major expansions are planned for the future.

It runs along Irwin and Stewart Creeks from Ray's Splash Planet, through Frazier Park and the Wesley Park neighborhood (site of some major renewal and redevelopment of an older neighborhood with Dilworth-like style), then on to the Phillip O. Berry Recreation Center, Bruns Avenue Elementary School, and Seversville Park.

Two portions of this greenway, near Walnut Avenue and near Summit Avenue, run along old railroad right-of-way, with tracks buried underneath . Our greenways generally run above buried sewer lines, on property unusable for other purposes, now converted to a wonderful recreation use.

This greenway links several neighborhoods to parks that include picnic areas, soccer fields, playgrounds, and a recreation center with gymnasium at Phil O. Berry Center.

The greenway runs near Johnson and Wales University and close to new urban residential areas in the gateway section of uptown. The greenway also connects to a designated city bike route at 4th Street, good for bicycle commuters.

On a trip, look for the public art in front of Ray's Splash Planet, the three tunnels, a long line of Sycamore trees at Sycamore Street, and the Children's Memorial Walkway and Garden in Frazier Park.

This paved greenway is a place to walk, jog, ride a bike, roller skate, push a baby carriage, and even ride a skateboard. The greenway is patrolled by Park Watch personnel, who walk, ride bikes, or drive a small patrol and maintenance vehicle like a golf cart.