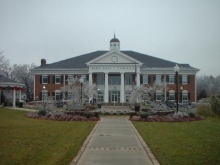 Though surrounded by urban development, McAlpine Creek Greenway is the only greenway where you can see river otter, beaver, and mink all in one general area. Also protected at this greenway is Mecklenburg County's only population of a native Larkspur (Delphinium tricorne), a very rare, purple, showy, spring ephemeral wildflower.

188 species of birds have been documented along McAlpine Creek Greenway, the second highest site total in Mecklenburg County.