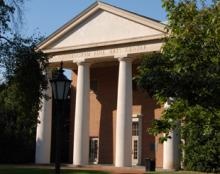 The Cunningham Fine Arts Building is the home of the theatre department at Davidson College. It includes two performance spaces as well as an acting/directing studio, a script library, a design studio for scenic and lighting work, a costume shop, a well-equipped scene shop, and other stage production facilities.

Built in 1961 on the site of the original Davidson College chapel of 1838, the building housed visual arts, music and drama until the completion of the Katherine and Tom Belk Visual Art Center in 1993. It is named for Reverend Dr. John Rood Cunningham, President of Davidson College from 1941 to 1957.

Cunningham is located at the corner of Griffith and Main, to the right of the college's main entrance. Parking is available in the main entrance lot.